International Council for the Training of the Seas

The International Council for the Exploration of the Seas needed someone to show them the basics of photography at their Copenhagen offices. With a conference coming up in Florida, it was more cost effective for them to hire Matthew to teach them how to photograph the event than hire a photographer in the United States.

As the name suggests, ICES are a worldwide organisation who specialise in ocean science. Due to the global nature of their work, finding a professional photographer in each and every location they visit can be a time-consuming task. They were ready to take matters into their own hands.

I arrived at their offices in Copenhagen and this is where the first half of the workshop started out. Five members of the team joined me for an intensive morning of camera functions and settings, as well as composition and lighting tips.

“We saved money on hiring a photographer in the US, and we learnt so much – especially about portraits.”

After lunch, we made our way out to the harbour to put some of these ideas into practice, and the group literally got down and dirty on the ground. Which is not negotiable.

Later we returned to the offices to finish off with staff portrait techniques.

Those particular staff members are now better equipped for taking stronger event photos and company headshots when they don’t have the time, nor budget, to hire a professional photographer.

I returned recently to review some of the team’s photos and advise them how best to move forward with their edits. 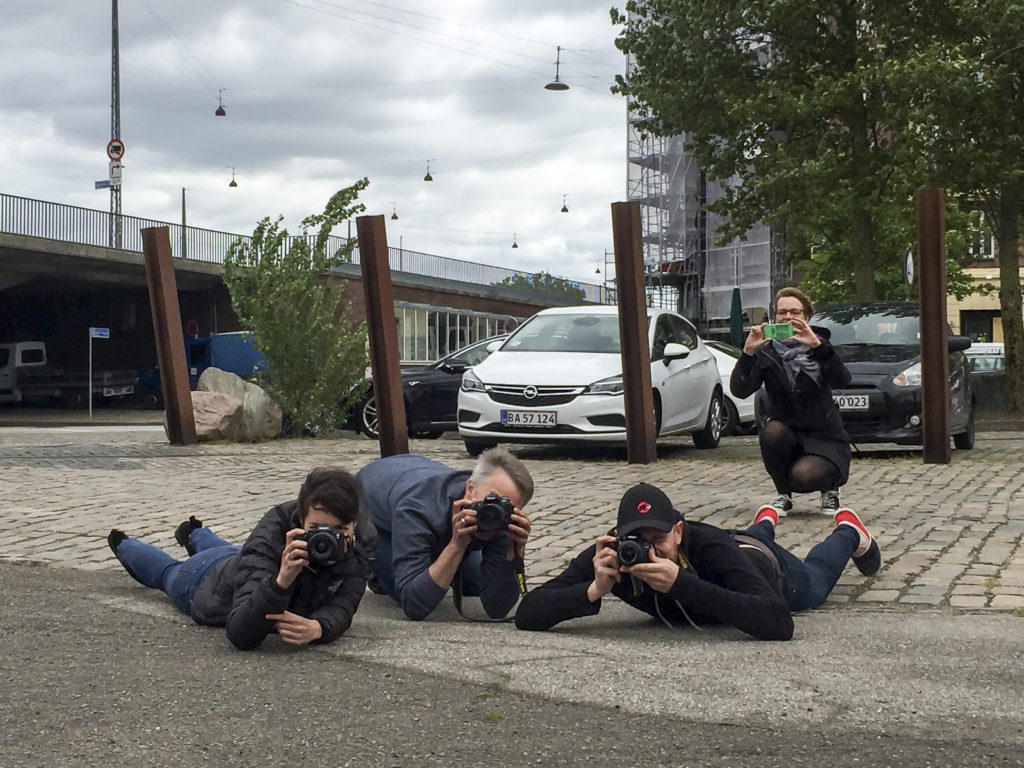 The Odense-based digital tech firm hired Matthew to show one of their employees how to improve her photo editing skills in Adobe Lightroom and take her current photography skills to the next level.

Kristina was already more than familiar with her digital camera when Matthew arrived at the company’s HQ in Odense, Denmark.

Although not officially the in-house photographer, her photography skills were quickly earning her that extra accolade at work, and she was taking more and more photos of employees, events and behind-the-scenes.

“Lightroom makes so much more sense to me now. And how aperture and focus work together.”

Matthew and Kristina spent half a day going through Adobe Lightroom together, and in between she received some additional photography advice whenever it came up during the session.

Copenhagen Language Center – one of the best-known language schools in the city – was one of my very first clients. Their writers and editors needed to learn how to take better pictures for their digital and printed publications

A team of six awaited Matthew at København Sprogcenter – the very same school where Matthew learnt to speak Danish – for a lesson in the fundamentals of photography.

Over the course of the day, Matthew practiced his Danish while his students practiced their photo skills. In particular, they learnt how to take better portraits of people interacting with things, such as magazines and other reading materials.

“We had so much fun with Matthew, especially when we started practicing our new portrait photography skills.”

The entire workshop took place inside the offices of København Sprogcenter, and the students very quickly adapted to their digital cameras, despite not knowing a great deal about them at the beginning.

RPCA arrived with a large group of journalists from various industries, including the global camera company Nikon. Everything had been planned perfectly for the Light Painting workshop: the location, the time, the props and the photo assistant.

Sadly, the rain changed all of that, and RPCA were forced to change their plans at the 11th hour. This meant some very fast decisions for Matthew, who was still shooting pictures with another client at the other end of town!

Once inside Tivoli, the rains continued as the group shuffled across to a ‘dry’ spot on the edge of the lake. They were already drenched to the bone when they started unpacking their tripods, cameras and lighting equipment, and all anybody could think about was: ‘When can we go inside and get warm?’

“What a challenge we created for Matthew” It was a short and wet workshop, but Matthew delivered on his promise.”

Undeterred, Matthew and his assistant continued to explain in broken French what, and how, they were going to learn, and a small, dedicated group stepped forwards with their gear.

Twenty minutes later the lesson was over and the group disappeared faster than you can imagine. Fortunately, the two members of the group had taken some great images, which Matthew agreed to edit and print for them.

Are You Happy with Mediocre Images?

Let’s work together to make them sharper